Interview : on Under Construction 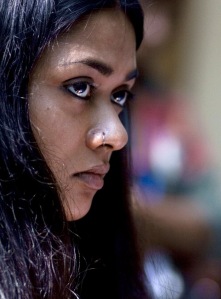 With her new film, Under Construction being selected in the main competition ‘The New Directors Showcase’ at the Seattle International Film Festival, Rubaiyat Hossain is gearing up for its theatrical release in Bangladesh on July 31, 2015.

In an interview with Weekend Tribune, this dynamic new director shares some insights into her fascinating life and work.

Tell us about your new movie
My new movie recently got cleared by the Censor Board and it is up for release on July 31. It is about a middle class urban Muslim woman’s journey. It’s about her day to day life being a theatre actor. The reason I call it Under Construction is because the background of the film is Dhaka city and if you look at the city, you cannot find a single spot where a building is not being constructed – so the city, as such, is being constructed – it’s in a transitional phase. The urban citizen is also in the making and so is the modern Bengali woman.

And by saying a larger theme, I mean it is about trying to question tradition because she is a theatre actress doing Rokto Korobi on stage for a very long time. She wants to re-interpret the play. Can someone re-interpret something as traditional as Rabindranath Tagore? Are you supposed to do that? What happens when you do that? It is also about questioning womanhood as we know it and how she is actually trying to push the boundary in an effort to find herself.

With your earlier film also being women-centric, how is this movie different?
This film doesn’t have a heated political background like the one of 1971. It is a contemporary story and it’s about your everyday life.

With your earlier film also being women-centric, how is this movie different?
This film doesn’t have a heated political background like the one of 1971. It is a contemporary story and it’s about your everyday life.

Some people might say that you had it easy because of your affluent background. What do you have to say about the challenges of being a woman director in Dhallywood?
I think it is difficult for anybody to make films. A lot of people who are making movies are getting funding from somebody else. If you want to make a film it doesn’t happen for free. You have to either have your own money or have somebody give it to you. Either way it’s the same thing. You can say that I have more creative freedom because I don’t have to go to an outside producer. However, in terms of technicality and in working with the crew, it’s totally vague. And also in terms of working in an industry that is predominantly male dominated, the struggle is the same.

At any given time, look at the landscape of female directors even in places like Bollywood or Hollywood, how many female directors are out there? And how many of them are actually telling women stories. I think Reema Kagti tried to tell a female story in Taalash but still she needed an Aamir Khan in it to sell the movie. I had to go to films where I had to teach myself to make short films and documentaries before I could be in a position to make a feature film. Having said that, it was easier in my second film because my camera person, two of my assistant directors were women, which made it easier for me. But still, most of the rest of the crew are all males.

When did the directing bug bite you?
I have always been a very visual person. I remember when I was young and liked a novel, I would make a casting list. As I grew older I started watching Satyajit Rai movies, and that’s when I began to realised just how meaningful films could be really be. I started reading his books on films and watched all his films. Throughout my undergrad studies, when I majored in Women Studies, I took some film production courses. After I finished my undergrads I went to New York Film Academy for a Diploma in Film Direction. It was during this Diploma course when I realised that this is what I really want to do. I still went ahead did my Masters in South Asia studies. Right now I am planning to do a PhD in Cinema Studies from NYU. I am interested in academia and film making. I don’t want to be a completely commercial filmmaker. My engagement with films is more passionate.

So you never want to make a pop corn entertainer?
Never ….maybe I could but that would be de-constructive. I am very fascinated by Bollywood. I go to Mumbai a lot. I am very fascinated by the power that this kind of cinema has over people. I am interested to work on something like that, if I could make a film that would have real commercial elements, I would like to see how it affects the society. I am really interested to see how films reflect the society – how cinema can reflect, analyse a social phenomena.

A simple rickshaw puller, for example, has his own bag of problems. Why do you think he will spend his hard earned money to watch a movie based on hard hitting social messages instead of an escape-from-reality entertainer?
I think we often underestimate the audience. If the story is strong, the audience will relate. Yes, you can entertain them with a lot of bright colours, loud sounds and really good music, but I am sure if you can actually present a film that represents the actual life and trouble of, for example a rickshaw puller, then I think they will enjoy it more. When we watch a film and if we find a reflection of our life in it that makes us really happy as I can relate to that. You never can understand what kind of films audience will like unless and until you give them those options. If you are only giving them one type of films then that’s all they are going to watch.

What do you want to do with your production house, Khona Talkies?
With Khona Talkies we basically want to take baby steps. We want to produce some meaningful cinema. We have already produced one documentary which unearthed three individual voices of Birangonas. We have produced a short film which is completed and will come out soon. We plan on producing more documentaries and shorts films. We want to create a platform where we can raise issues which are otherwise not encouraged to be spoken of. We are going to start some films sessions where we are going to watch films and have discussions with people who are interested to engage with films as visual texts.

There is a recent trend for the media hype for a product out-selling the product itself. What is your take on this?
I think in today’s time and age it has become very important because if your film is going to be in theatres and if you don’t let people know then they are not going to come. But I think most of the promotions we do is online on Facebook, Youtube etc. However, I think one has to reach out not saying that my film is the best, come and watch it but at least saying my movie is in theater, come and watch it.

In the long run, do you want people to tag you as a ‘female director’ or just a ‘director’?
I think I always want to be identified as a woman. I think every person has one battle to fight and I have always picked my battle to be a woman, to find my space in the world and raise my voice as a woman creating the same space for other women. At the same time, when you make a film, you make a film. For example, in Under Construction there is a scene with this python and I am dead scared of snakes. But the moment we started shooting and I was looking through the camera, I was not scared anymore. At that moment it was not a snake but a part of my film. So when you make a film, you are just making a film and that goes beyond gender roles. But I always want to be conscious of myself as a woman.

So you feel that be it commercial or art house movies, women are shown in a very sexual way?
There is certain amount of objectification. As a director it is your own journey to find your form of representation. I wrote an article called, female director, female gaze which dealt with how a female director represents a female character. Do they sexualise the character or do they completely desexualise her? I think that’s a process of which the language will be made clearer as more female make films.