Even after the censor board passed “Meherjaan” with five severe slashes, the film had to be stripped off theatres due to the objection some quarters of the society voiced against it.

Facts about our films:

* The first motion picture was projected in Bangladesh on April 4, 1898 in Bhola.

* The first cinema theatre in Bangladesh was called Picture House, located in Armanitola, Dhaka, which was set up around the time of World War II in a building originally built to store jute.

* Bangladesh’s first silent features: Shukumari (1927-28) and The Last Kiss (1931) made by the affluent young members of Dhaka Nawab family.

* The first talkie feature titled Mukh o Mukhosh was made in 1956.

* Currently in Bangladesh, each year about 40 films are released.

* Bangladesh has one of the highest cinema ticket taxes — 150 percent.

Ticket sales drastically fell as soon as the pirated copies of “Monpura” were made available in the market.

In today’s market and imposed capitalist desire driven cultural economy it has become next to impossible for filmmakers to engage in the profession of filmmaking without thinking of the language of profit-making. Just to survive in the industry and keep making more films, a filmmaker must adhere to the local popular demands. Filmmaking, unlike other forms of creative arts, requires huge financial, technical and infrastructural support. Half trade-half craft, filmmaking offers a double-edged sword to walk on for its practitioners.

Those who want to translate into films their own personal philosophy or creative thoughts are struggling all over the world. In Bollywood for example, Farhan Akhtar makes Rs 100 crore budget films studded with stars and item songs, whereas a filmmaker like Onir still struggles to have a 70 print release of his critically acclaimed film “I AM” which deals with the complexity of relationship, political boundaries and sexuality.

The space for different kind of cinema is slowly emerging in Bollywood, especially due to the advent of multiplexes. Since multiplexes can simultaneously play more than one film, they can now afford to play slightly off-track films, at slightly off-track hours; for instance “Delhi Belly” screened at 2 am at Mumbai Juhu PVR. It ran houseful; it was a hit!

Thus, ‘multiplex films’ have emerged as a term in India, whereas, by the term they denote the films that will not pull the masses like “Singham”, but these films pull a considerable amount of audience. These films, banking mostly on urban multiplex going audiences — like “I AM”, “Iti Mrinalini”, “Shor in the City” — are made within Rs 1-3 crore budget, recovering the original investment and profit by getting themselves a 70-100 print release.

With so many awards in their bags, one would think producers chase filmmakers like Aparna Sen or Onir, but the reality is quite different. Aparna Sen struggled to find a producer to raise her frugal Rs 1 crore budget for “Iti Mrinalini”. The reason why I bring up examples from Bollywood is because I want to highlight the struggle of filmmakers in an established industry like Bollywood to contextualise the predicament of Bangladeshi filmmakers where there is no coherent film policy or organised film industry to begin with.

Recently the government has granted a Tk 59 crore budget to modernise FDC production and post-production facilities. Now we will witness longstanding tender issues and corruption. Eventually will FDC be modernised? The answer is not a very hopeful ‘yes’ from where I stand.

The biggest challenge for Bangladeshi filmmakers is the calamitous lack of infrastructure. There is no viable network among filmmakers, producers, distributors and cinema hall owners. The advent of private television channels has taken over this empty field and initiated a culture whereby films are made within very limited budget, premiering on television and theatre at the same time. This makes the films more prone to piracy, thus reducing the audiences at the theatres.

Bangladesh also has one of the highest rates of ticket tax in the world. Whereas, our neighbours in South Asia have changed their film policy and reduced the entertainment tax, Bangladesh still holds on to a 150 percent ticket tax adhering to a law that dates back to the British period. In Catherine Masud’s recent writing on Film Policy in Bangladesh, she has mentioned that not only the poor production of films, but also the tax factor has been pivotal in the recent shutting down of dozens of cinema theatres in Bangladesh.

The quality of local sound studios is also very poor; as of now we do not have a proper mixing studio. DOLBY sound system is not yet properly introduced in Bangladesh; Star Cineplex being the only theatre with a functioning DOLBY sound system, that too with speakers that are not aligned properly! The quantity and quality of 35mm, 16mm and digital cameras are also very scanty, not to mention the scarcity of lens. “Meherjaan” was shot only with 4 lenses at our disposal, 50 percent of the HMI lights we rented from FDC and private enterprises blacked out during shots and/or gave out flickers. These conditions largely hinder the execution of a filmmaker’s creative vision, and a filmmaker in Bangladesh has to constantly tailor his/her creative needs to the inadequate reality of local production facilities.

Due to meagre post-production facilities and the terrible projection quality in the cinema theatres, the audience today are unable to take pleasure in the joy ride of cinema. It is better for them to watch a film in the privacy of their homes on computer or TV-DVD player rather than going to the theatres with no AC, low hanging loud ceiling fans, bad sound and picture projection quality and very uncomfortable seats.

Finally, there are no private or national film institutes in Bangladesh who can produce technically competent directors, cinematographers, editors, gaffers, sound designers and sound engineers. Thereby we are working with a film crew who are self taught, thus in the process of filmmaking in Bangladesh each director has to go through an endless saga of technical breakdowns and subsequent troubleshooting.

Nurul Alam Atique's “Dubshatar” ended up having a television premiere, deeply disappointing the filmmaker and crushing his dreams about the possibility of digital cinema in Bangladesh.

When I spoke to Giasuddin Selim, the financially successful director of “Monpura”, he said the biggest challenge for him is the lack of professional producers who would raise the funds, create a film’s production and release plans and create a framework for the director to execute his/her film. For Selim, raising funds and retrieving it from the market is not an issue, he has proven that with “Monpura”, but where Selim struggles is with his double role as a creative director/writer of his film and dealing with the ruthless business world to create the material conditions to make his film — a job originally designated for a professional producer. Piracy is also a major issue according to Selim. He lamented that ticket sales drastically fell as soon as the pirated copies of “Monpura” were made available in the market.

Abu Saeed, an award winning filmmaker who mostly makes films for the festivals with small release and a very small audience pull in Bangladesh said that he will not stand down from his creative impulse to make issue-based cinema which do not draw big audiences in Bangladesh. Saeed sticks to his commitment to make serious cinema that are not popular to the mainstream, thus, he struggles to make films with very small budgets, often facilitating his own projection facility to screen his films in theatres as he did with his last film “Opekkha”, which was shot digitally and released for digital projection in Balaka with his editor Sujan Mahmud’s aid.

Catherine Masud in her recent writing about film policy in Bangladesh has proposed the promotion and introduction of at least 2K digital projection system in Bangladesh. So far, there is no hope that we will see the day. In recent times some interesting films have been made by independent filmmakers in the digital format which did not see the light of theatre release due to the lack of digital projection system in the country.

Nurul Alam Atique’s “Dubshatar” ended up having a television premiere, deeply disappointing the filmmaker and crushing his dreams about the possibility of digital cinema in Bangladesh. When I spoke to Atique, he expressed that he still harbours hope for the possibility of digital cinema in Bangladesh. “As we constantly work with limited funds and production facilities, but we have endless stories to tell, digital format can prove itself to be the most effective medium in Bangladesh,” Atique said.

Ishtiaque Zico, a 28 year old independent filmmaker whose short film “720 Degrees” premiered at the prestigious Venice Film Festival and was critically acclaimed in the festival circuit, said, “As an independent filmmaker, I am responsible for (not) making my film. Internationally the condition and struggle of independent filmmakers are also very tough; maybe the texture is different in Bangladesh.”

Currently Zico is working on his second film “Southeast Loves” with a couple of foreign producers. When I asked him about the challenges of making films in Bangladesh and how he saw himself getting involved in the local film industry, he said, “I don’t have an expert-like opinion, I am confused and clueless too. Every possible blame-objection-suggestion regarding the condition of our film industry has been expressed. This is not the time to comment, let’s keep filming and fighting.” 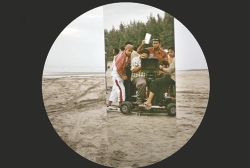 “720 Degrees” premiered at the prestigious Venice Film Festival and was critically acclaimed in the festival circuit.

I could not agree with Zico more. This indeed is a time for us to keep filming and fighting, tracing alternative ways to make our voices heard as filmmakers in this adverse terrain. From my experiences of filming “Meherjaan” and releasing it into the mainstream theatres, to my utmost disappointment the biggest hurdle proved to be censorship. Even after the censor board passed “Meherjaan” with five severe slashes, the film had to be stripped off theatres due to the objection some quarters of the society voiced against it. Presently, as I gather all my strength and work towards my second project, I am so much more aware of the official and social censorship of Bangladeshi society.

To bypass our society’s narrow threshold of issues tolerated in cinema, I am opting for a joint production with India; my deduction being if Bangladeshi society censors my film, at least I will have an alternative audience base and market to recover the investment from. This certainly is not the desirable or a particularly hopeful scenario for a filmmaker, not to mention the overall patriarchal attitude that rules the film world and questions my credibility as a fe(male) director every step of the way.

In Bangladesh, we in fact, have nothing going for us as filmmakers except our dreams and desire to make films, and the large number of film lovers who still rush to the theatre the moment a watchable film is released. We as filmmakers are at our own risk, walking a path that has not been charted adequately by the state and our predecessors. As Nurul Alam Atique puts it, “Pothik, tomake khuje nite hobe nij poth.” (Traveller, you must chart your own path.”)

Rubaiyat Hossain is a filmmaker and researcher.